“Some of my ventures have worked out and some have not, but they have all been great learning experiences. In fact, my first start-up company was created out of desperation.” 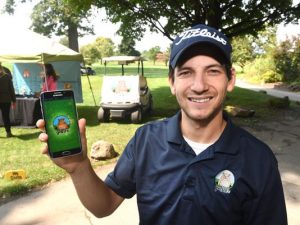 It might be an understatement to say that Jason Pearsall is hard-wired as a golf entrepreneur. Since graduating from college in 2007, Jason has either started, or played an important role in a number of successful businesses – both cutting edge and traditional.

While in college, and prior to co-founding Club Caddie Inc. — his current entrepreneurial venture —  Jason had created and sold Performance Personal Computers, a successful e-commerce company. He had also built an app called “Golfler,” a tee-sheet and on-demand food and beverage delivery system for golf courses that was acquired by Supreme Golf.

Jason also currently serves as an owner and Managing Partner at Flushing Valley Golf and Banquet Center in Flushing, Michigan, where he is able to test Club Caddie’s software every day this 18-hole, daily fee, semi-private golf facility that features an extensive food, beverage and banquet operation.

Jason is the kind of person who generates more great ideas than he has time to do them.  And I suspect that he’s only just getting started as a business builder.  If Jason’s resume doesn’t make you feel like an underachiever, here’s another fact that might push you over the edge: he also earned a law degree and is a licensed attorney.

But is Jason a nice guy? A review that was posted on Glassdoor.com from a former employee of his golf app company reported that, “Jason Pearsall is an amazing leader with both muscular intelligence and creative vision. His charisma is a major determinant guiding the company’s success.” But there was also one negative comment. He wrote “Detroit is cold. Perhaps move the company Headquarters to Florida or California.” [In his interview, Jason explains that he lives in Michigan only because his wife’s family is located there.]

On his career path: “My career plan was not to run an e-commerce business. I wanted to go to law school. Someone offered to purchase my company, so I sold the company and continued on to law school.”

On his goal to be a lawyer: “When I was young, my grandfather told me that he always wanted to be a lawyer, but never did. He told me that I should go to law school. So I set that as a goal from avery young age, and I am still a licensed lawyer and do much of the legal work for our businesses.”

On his decision to co-found Club Caddie: “It was an opportunity to leave a safe job and to try something new, and I thought, “If I don’t do it now, I am never going to do it. So I seized it.”

On the turn-around strategy for Flushing Valley Golf Club: “When we bought Flushing Valley, we wanted to have a great golf course because we are all golf guys. But we recognized that we were not going to make it if we just tried to survive as a golf course.”

On his bucket list: “I have no bucket list.  I rarely think about anything other than what’s right in front of me. My wife calls Club Caddie my baby, because I’m working on it every moment that I can.”