“I tried to be the eyes and ears of the reader and to convey that in my story the next day. I think that’s lost today…the printed word has been devalued.”

Hank Gola has spent more than four decades as a journalist, covering professional football and golf for the New York Daily News and the New York Post. Hank started his career in New Jersey at The Herald-News of Passaic, and the Daily Record of Morris County, where he covered the Cosmos of the North American Soccer League and the New York Giants of the NFL.

​Hank’s talent as a sportswriter has earned several awards over the years. Most recently, in 2018, he received the coveted Lincoln Werden Award for golf journalism from the Metropolitan Golf Writers Association; an honor he shares with the likes of Jim McKay, Chris Schenkel, Dave Anderson, John Feinstein and George Peper.

Hank has also written three books.  In 1987 he published “Hard Nose with Jim Burt: The Inside Story of the Giants’ 1986 Super Bowl Season… and in 1998 he published a pictorial biography of a young golfer named Tiger Woods. This past November, after nearly 4 years of meticulous research –involving more than 75 personal interviews – Hank published “City of Champions“…a book that tells the story of the people and the drama behind the Garfield High School Boilermakers in their quest to win the national football championship in 1939. 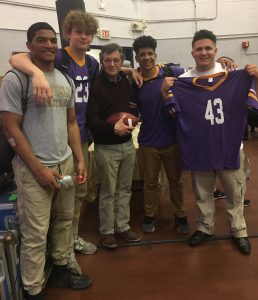 Hank with a few cast members from Garfield High School, which wrote and produced a play based on his “City of Champions” book.

As a native of Garfield, New Jersey, this book was a labor of love for Hank, as well as a very personal tribute to a generation of Americans who embodied this nation’s highest ideals; many of whom eventually gave their lives fighting the tyranny of Hitler.  City of Champions continues to receive critical acclaim, and has been particularly well received within his hometown.

Next month, Hank Will receive the Walter D. Head Award from the Garfield New Jersey Rotary Club in recognition of his book’s rekindling of the town’s pride in an achievement that took place 80 years ago, and that has long provided Garfield with the right to call itself “The City of Champions” – a claim that has remained to this day on the road sign that welcomes visitors into the town.

I’m honored to have Hank as a guest on Golf Yeah, and was particularly pleased to learn in my research that we have two things in common: an interest in Civil War history, and Huckleberry Finn as one of our favorite books.

On getting his start as a journalist: “You either started on the news side writing obituaries, or on the sports side covering high school games over the phone. That’s how you broke into the business back then.”

On being out of work for 2 years after the New York Post layoffs: “I coached a lot of Little League baseball, and got to spend time with my son. I wrote a weekly column for the Bridgeport Post before the Daily News came calling. I don’t regret that period of my life.”

On his preferred working environment: “I always would write from home, the stadium, or the golf course. I only went into the office when my laptop broke. I once turned down offer from the New York Post to work the news desk, because I had to be outside.”

On his interview with Walter Young, a member of the ’39 Boilermakers: “Mitch Albom had his Tuesdays with Morrie, and I had my “Fridays with Walt.”  I lost my dad in 1986, and talking to Walt about Garfield High School was like being able to talk to my dad again.”

On covering Tiger Woods: “It was always difficult to get a good working relationship with Tiger because he would never open up…He really never gave anyone anything; he was always Tiger behind the mask.”

On his golfing experience: “When I was covering golf, we would take our sticks with us, and play everywhere. I’ve played 873 different golf courses in my life, and I would like to get that number to 1,000.”

Hank with the championship jacket and letterman sweaters given to him by Walter Young, a member of Garfield High School’s 1939 national championship football team.

A sampling of Hank’s recent articles in the New York Daily News. Hank will be covering the 2019 PGA Championship at Bethpage Black for the Daily News

Here’s Hank’s book, “City of Champions: An American Story of Leather Helmets, Iron Wills and the High School Kids From Jersey Who Won It  All.”  It’s a real-life story of everyday heroes and lives well led.